In this week’s blog, Kira, an IB student from Abu Dhabi, writes about her experiences setting up the UAE’s first ever junior CPR program for her CAS project!

The UAE’s first Junior CPR Program: Where it Came From, Where it’s Going

Arghhhh CAS… Let’s admit it, we’ve all said it, or at least thought it at one point or another. Juggling school, sports, sleep and somewhat of social life is hard enough without the addition of CAS, all to often making it a chore rather than something that we should take pride in. I remember my MYP years filled with tedious, mind-numbing CAS activities like beach clean-ups and recycling campaigns. Despite this, by some sheer twist of luck, I found my CAS inspiration through my seventh grade English teacher, Mrs. Julie Brunelle. As a class, we were given the task of preparing a presentation on a topic which we felt needed to change, while my classmates focused classic topics of obesity and animal testing I was inspired by the alarming rates of cardiac arrest in the United Arab Emirates (UAE). More importantly, I was inspired by the fact that becoming certified was generally discouraged to children under 16, as they were considered too weak, and courses which do provide certification often take several days of both classroom and hands-on learning before receiving a certificate. I aimed to change this. With a little guidance from my dad (an Emergency Physician), I launched into my research on providing a simple CPR course for students, allowing them to become more than just bystanders should they ever witness a family member, friend or even someone they didn’t know fall victim to a heart attack. Gathering the research was the easy part, I spent months researching online, reading article after article, making sure my knowledge wouldn’t be my limiting factor. Eventually, I came across a program originating from the American Heart Association (AHA), it included a kit with inflatable manikins and DVDs with the intention of allowing teachers to educate students on the basics of simple CPR (chest compressions and emergency procedures). Though I now realized that my course wouldn’t be able to offer certification, it would still give students the necessary skills to possibly save a life. I ended up ordering the kit and teaching myself how to administer chest compressions, but there was one problem, the video taught emergency steps like calling “911,” clearly adapted for the United States. However, in the UAE the emergency number is “999,” yet most of my friends and myself were unaware of this, also the laws and regulations in the UAE are dramatically different when it comes to things like the “good samaritan law” etc… 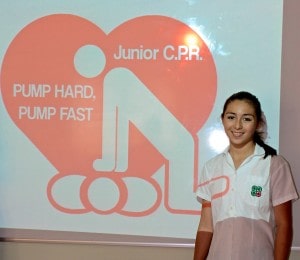 Through my research I had found that in the UAE, if someone collapses due to cardiac arrest for example, administering CPR even with certification could involve you in legal issues, even more drastic if the victim dies or they are/were a local citizen, and as a result the majority of those who know how to administer CPR become wary of helping others, a depressing statistic in today’s modern age. With this, my course seemed doomed to fail, because why would anyone sign up to learn CPR if they aren’t certified and if they were to help someone they may be blamed for the death of the victim? I soon realized the only way in which my course would become successful would be by developing an alternative procedure based upon the prior guidelines set by the AHA. I eventually developed a procedure which included the following six steps:

With setting up this course I developed my own logo to be printed on permission forms, feedback forms and homemade key chains with a shortened version of the emergency procedure which consisted of a self-laminated card on a key ring to be put on backpacks. The idea behind these was to help students keep a clear head and remember what they learned should they be faced with an emergency situation. Additionally, I created a website (www.juniorcpr.weebly.com) and Facebook page (https://www.facebook.com/juniorcpr) to allow a greater number of people to engage with the course.

With the help of my friend Phoebe Meek, we taught the course together allowing for a max of 20 students at one time. We began with a pilot class to gage interest and to see how smoothly we could run it in real time, and it was great for our first try. With that said we definitely learned from each course altering our presentation and teaching techniques, and cutting unnecessary information to allow more hands-on practice. 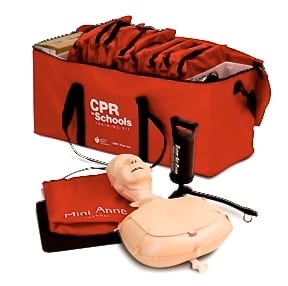 We ran the course for about 2 and a half years covering the basics and including when and when not to administer CPR, though within that period I faced countless difficulties which made me question my willingness to see this project through. The first difficulty we faced was the lack of enthusiasm, after teaching a few classes we had essentially taught all the kids that wanted to be taught, the rest had no interest in giving up a lunch break to come and join. On top of that students would often forget to bring in their permission forms and ultimately we couldn’t teach them. I attempted to find a sponsor to provide a free lunch for those who joined the course, but knowing school students the only thing that would entice them would be pizza or burgers, not exactly heart-healthy foods if you know what I mean. As school became more intense, and students became less and less interested the course began to fade out. As of right now it isn’t running within my school, but my aspirations for it still stand. I hope to find several students with a passion for this topic to take it into their own schools and continue it for the students who come after them.

All in all, what I really wanted to say is that CAS may be boring and irritating with all the work you already have, but if you really find something you love than it doesn’t become as tedious anymore, it becomes something that you can share with others. Even if it doesn’t always work out, let your creativity drive you, the more out there your ideas are, often times the better they are!